Instead of targeting gangs and illegally smuggled firearms, Justin Trudeau is introducing a firearm buyback program that punishes lawful firearms owners. The fact is, hobbyists, collectors, sport shooters, and hunters are not the ones to blame for the rise in gun crime in Canada – gangs, criminals, and the guns they illegally smuggled from the US are. 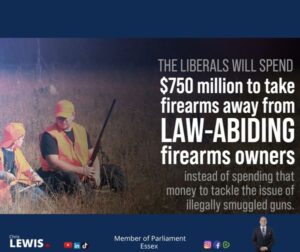 Many in the firearms community expressed concern that they would not be fairly compensated. What is worse is the details released so far about the Liberals’ gun buyback program confirm that those who participate in good faith and follow the law could end up being financially punished, potentially losing thousands of dollars.

The Liberal government has yet to release details on how the so-called “buyback” will be safely implemented.

I have, and will always, support common-sense firearms policies that keep communities safe and guns out of the hands of dangerous criminals.