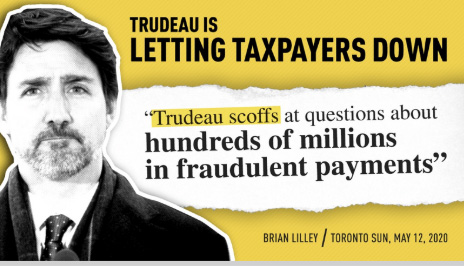 This week, Canadians learned that federal employees vetting applications for the CERB and EI benefits during the pandemic have been told to ignore potentially fraudulent claims. According to a memo issued last month by ESDC, “if employees detect possible abuse they should still process the payment and should not refer the file to the department’s integrity branch.” A source familiar with the situation claimed 200,000 applications have already been “red-flagged” as possibly fraudulent because of dubious claims of past employment income and other factors. This means the government could be giving $400 million to fraudsters each month.

Today, media are reporting that a memo was sent to federal employees stating that they should approve CERB claims even if an individual quits their job voluntarily or was let go due to misconduct.

Both the Prime Minister and Ministers claim they want to get money out to Canadians in need as quickly as possible, and will deal with cleaning up fraudulent claims later. However, government officials have confirmed that they will not review claims until after the 2021 tax season. There are also concerns that money owed by fraudulent claimants will not be recouped.

Conservatives are focused on helping Canadians who have lost their jobs during this crisis through no fault of their own. We have put forward a number of constructive solutions to improve government programs and policies, but we know there is still much more to do.