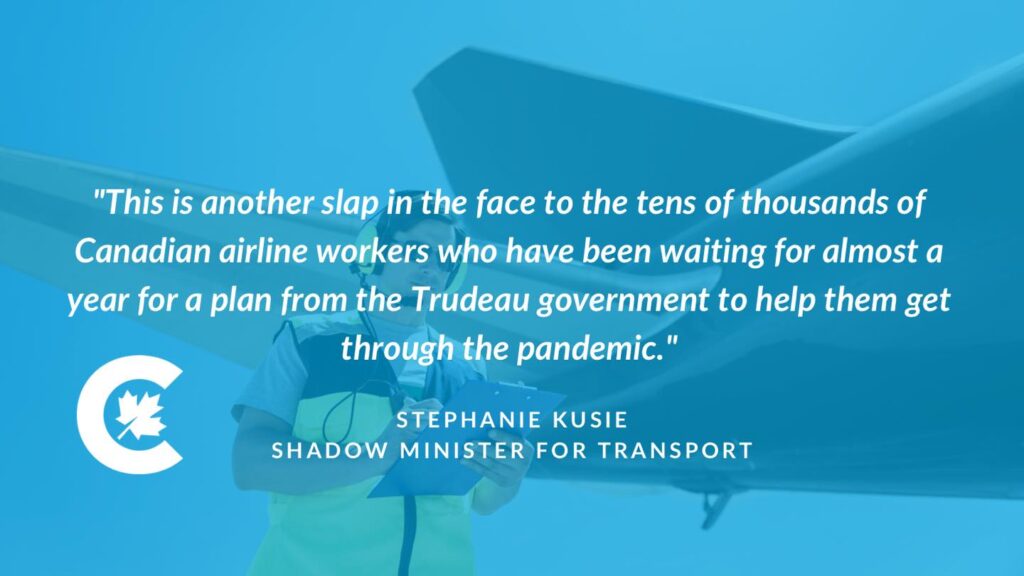 “Today we learned that the Trudeau Liberals gave a dozen foreign airlines Canadian tax dollars, despite significant support from their own governments and one of the airlines closing its Vancouver office before the pandemic lockdowns began in March. How did a company without an office in Canada qualify for the wage subsidy?

“This is another slap in the face to the tens of thousands of Canadian airline workers who have been waiting for almost a year for a plan from the Trudeau government to help them get through the pandemic.

“Canadian jobs are on the line. WestJet announced today that because of ‘incoherent and inconsistent government policy’ they will be cutting hours, laying off staff, and reducing their capacity by a third. This is on top of the cuts that other airlines have made in recent months, impacting regional service across the country.

“These job losses are also yet another blow to Western Canada, where WestJet is based.

“Enough is enough. The Liberals need to introduce a real plan to test international travellers at our airports to ensure the safety of Canadians and provide the certainty and support that tens of thousands of jobs in Canada’s airline sector need.”

On the broader issue, automatic tax increases fail to factor in market fluctuations, cyclical economic downturns, and catastrophic events like the Covid pandemic which has hit the hospitality industry particularly hard. The alcohol tax escalator increase, first introduced by the Liberals in Budget 2017, needs to be suspended in the new year and removed entirely in Budget 2021.

PM Trudeau says this is not the time to increase taxes. Yet, he, his Liberal MPs with the full support of the NDP, Bloc and Greens, voted to defeat our Motion, which also included a suspension of the latest Liberal carbon tax and CPP payroll increases, as well as a call for rapid testing. Businesses need economic stability and to be able to safely stay open. Instead, they have faced unprecedented uncertainties bordering on chaos due to the economic mismanagement of the Trudeau government.