Essex MP, Chris Lewis, did an interview with CBC in advance of the Budget announcement today. Excerpts from interview immediately below. A link to the article is included.

Chris was asked what he “hopes to see in the Budget?” He spoke of the need for vaccines as a key factor in re-opening the economy – “no more empty promises from the Prime Minister” about vaccine procurement. “We need a clear plan for getting vaccines to all Canadians who want it. Provinces need results. They are ready and standing by to distribute.” Lewis also said, “Canada’s debt is 1.9 trillion dollars. We need a very smart, very unique, economic recovery plan”.

Lewis was also asked if he was “optimistic about today’s Budget?” His reply: “A lot of the Bills the Liberals introduce are not the greatest quite frankly. I hope there is funding for mental health – it is a major, major issue – many are suffering in silence. They can’t be with their friends, their neighbours, can’t even be with their parents. It is something that needs to be recognized and it’s going to take Federal support. I speak to so many people, so many broken hearts, so many sad business owners, and so many suicides, quite frankly. I really hope the Budget addresses this issue.”

Lewis went on to say, “I am the ultimate optimist, if we don’t look forward to something with energy and hope that tomorrow can be better, then we have already lost the battle and I refuse to give up on this amazing country we call Canada.”

In closing, Lewis said, “I really hope the Budget focusses on families and has a true economic recovery plan for all businesses but especially small businesses – they are the ones that drive the economy.” He added, “it is also really important to get families reunited across the border – we, our riding of Essex, has a lot of families that have not seen each other for a lot of months. We need to come up with a plan to get them safely reunited. Too many have suffered in silence for too long.” 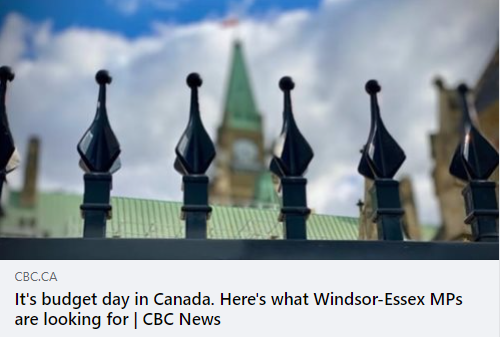 Check out CBC's Article to learn more on this Issue