This seems to never end folks… 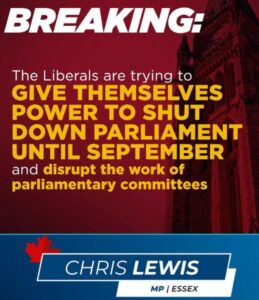 So today, the Liberals will call Government motion 11 for debate in the House of Commons. The motion includes a proposal to give the NDP-Liberal coalition new powers to extend sitting hours in the House, temporarily remove certain procedural tools from the opposition, and for Justin Trudeau to adjourn the House until September without notice or all-party agreement, among other changes. One by-product of this motion will be a disruption of the work of many Parliamentary committees (including investigations into Justin Trudeau’s dealings).

If Jagmeet Singh and the NDP want to maintain credibility as an independent party, they will oppose this power grab, speak out against the Prime Minister’s attempt to give himself the ability to shut down Parliament.

Those in Essex can rest assured I will fulfill our constitutional obligation of holding this government to account. I will continue to be the voice for you plus the millions of Canadians who are left behind while Justin Trudeau presides over the decline of democracy in Canada.